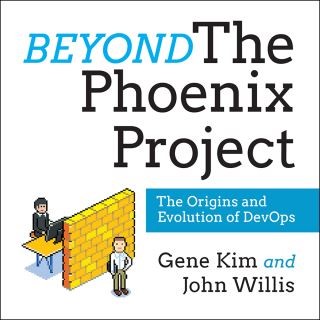 Beyond the Phoenix Project

The Origins and Evolution of DevOps

Gene Kim and John Willis present this nine-part series that includes an oral history of the DevOps movement, as well as discussion around pivotal figures and philosophies that DevOps draws upon, from Goldratt to Deming; from Lean to Safety Culture to Learning Organizations.The audiobook is a great way for listeners to take an even deeper dive into topics relevant to DevOps and leading technology organizations.

Gene Kim: "Gene Kim is a multiple award-winning CTO, researcher and author, and has been studying high-performing technology organizations since 1999. He was founder and CTO of Tripwire for 13 years. He has written six books, including The Unicorn Project (2019), The Phoenix Project (2013), The DevOps Handbook (2016), the Shingo Publication Award winning Accelerate (2018), and The Visible Ops Handbook (2004-2006) series. Since 2014, he has been the founder and organizer of the DevOps Enterprise Summit, studying the technology transformations of large, complex organizations. In 2007, ComputerWorld added Gene to the “40 Innovative IT People to Watch Under the Age of 40” list, and he was named a Computer Science Outstanding Alumnus by Purdue University for achievement and leadership in the profession. He lives in Portland, OR, with his wife and family." John Willis has worked in the IT management industry for more than 30 years. He has authored six IBM Redbooks for IBM on enterprise systems management and was the founder and chief architect at Chain Bridge Systems. He lives in Atlanta, Georgia.