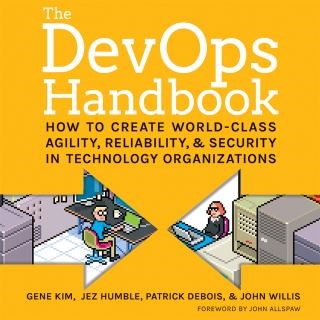 Increase profitability, elevate work culture, and exceed productivity goals through DevOps practices. More than ever, the effective management of technology is critical for business competitiveness. For decades, technology leaders have struggled to balance agility, reliability, and security. The consequences of failure have never been greater—whether it’s the healthcare.gov debacle, cardholder data breaches, or missing the boat with Big Data in the cloud. And yet, high performers using DevOps principles, such as Google, Amazon, Facebook, Etsy, and Netflix, are routinely and reliably deploying code into production hundreds, or even thousands, of times per day. Following in the footsteps of The Phoenix Project, The DevOps Handbook shows leaders how to replicate these incredible outcomes, by showing how to integrate Product Management, Development, QA, IT Operations, and Information Security to elevate your company and win in the marketplace.

Gene Kim: "Gene Kim is a multiple award-winning CTO, researcher and author, and has been studying high-performing technology organizations since 1999. He was founder and CTO of Tripwire for 13 years. He has written six books, including The Unicorn Project (2019), The Phoenix Project (2013), The DevOps Handbook (2016), the Shingo Publication Award winning Accelerate (2018), and The Visible Ops Handbook (2004-2006) series. Since 2014, he has been the founder and organizer of the DevOps Enterprise Summit, studying the technology transformations of large, complex organizations. In 2007, ComputerWorld added Gene to the “40 Innovative IT People to Watch Under the Age of 40” list, and he was named a Computer Science Outstanding Alumnus by Purdue University for achievement and leadership in the profession. He lives in Portland, OR, with his wife and family." Jez Humble is Vice-President at Chef. He has worked with a variety of platforms and technologies, consulting for non-profits, telecoms, financial services, and online retail companies. His focus is on helping organizations deliver valuable, high-quality software frequently and reliably through implementing effective engineering practices. He lives in San Francisco, California. John Willis has worked in the IT management industry for more than 30 years. He has authored six IBM Redbooks for IBM on enterprise systems management and was the founder and chief architect at Chain Bridge Systems. He lives in Atlanta, Georgia. Patrick Debois is an independent IT-consultant who is bridging the gap between projects and operations by using Agile techniques both in development, project management and system administration.