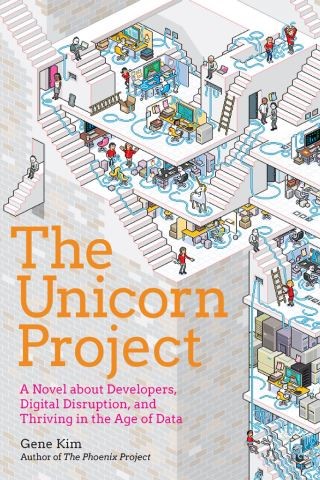 A Novel about Digital Disruption, Developers, and Overthrowing the Ancient Powerful Order

The Phoenix Project wowed over a half-million readers. Now comes the Wall Street Journal Bestselling The Unicorn Project! This highly anticipated follow-up to the bestselling title The Phoenix Project takes another look at Parts Unlimited, this time from the perspective of software development. In The Unicorn Project, we follow Maxine, a senior lead developer and architect, as she is exiled to the Phoenix Project, to the horror of her friends and colleagues, as punishment for contributing to a payroll outage. She tries to survive in what feels like a heartless and uncaring bureaucracy and to work within a system where no one can get anything done without endless committees, paperwork, and approvals. One day, she is approached by a ragtag bunch of misfits who say they want to overthrow the existing order, to liberate developers, to bring joy back to technology work, and to enable the business to win in a time of digital disruption. To her surprise, she finds herself drawn ever further into this movement, eventually becoming one of the leaders of the Rebellion, which puts her in the crosshairs of some familiar and very dangerous enemies. The Age of Software is here, and another mass extinction event looms—this is a story about rebel developers and business leaders working together, racing against time to innovate, survive, and thrive in a time of unprecedented uncertainty...and opportunity.

Gene Kim: Gene Kim is a multiple award-winning CTO, researcher and author, and has been studying high-performing technology organizations since 1999. He was founder and CTO of Tripwire for 13 years. He has written six books, including The Unicorn Project (2019), The Phoenix Project (2013), The DevOps Handbook (2016), the Shingo Publication Award winning Accelerate (2018), and The Visible Ops Handbook (2004-2006) series. Since 2014, he has been the founder and organizer of the DevOps Enterprise Summit, studying the technology transformations of large, complex organizations. In 2007, ComputerWorld added Gene to the “40 Innovative IT People to Watch Under the Age of 40” list, and he was named a Computer Science Outstanding Alumnus by Purdue University for achievement and leadership in the profession. He lives in Portland, OR, with his wife and family.